Full Name
Mr. Peter Arvai
Job Title
CEO and Co-Founder
Company
Prezi, Inc.
Speaker Bio
Peter has spent the last 10 years building products that help people make better decisions. As CEO and co-founder of Prezi, a fast-growing startup based in San Francisco and Budapest with over 85 million users and 300 employees worldwide. Prezi’s community is challenging the status quo of how to be understood and remembered in a world that is increasingly crowded with data but lacking insight. Prezi’s platforms are specifically designed to help improve communication and understanding between a presenter and the audience.
Peter is also very involved with establishing organizations that promote entrepreneurship and diversity in Hungary and beyond. For example, Peter is the chairman and co-founder of Bridge Budapest, an organization that has shared 5 million stories of inspiration every year. The “We Are Open” initiative, co-founded by Peter, has built a community of nearly 1000 companies that are now committed to diversity and openness in the workplace.
Peter has won numerous awards since founding the company, including European Web Entrepreneur of the Year and the Europas European Tech Startups award for Best Startup Co-Founders. He was ranked number 11 on the 2016 OUTstanding & Financial Times Leading LGBT Executives List of 100.
In his spare time, Peter enjoys prodding fellow colleagues to join him at yoga and meditation classes. Additionally, he’s the go-to cultural translator at Prezi, having lived and worked in Japan, Sweden, Hungary, Singapore and US. 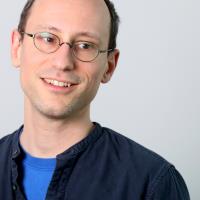